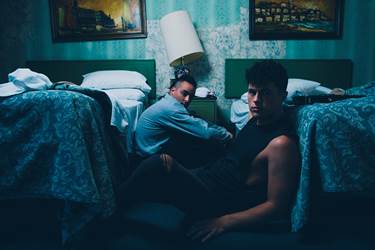 Nashville based alt-pop band Nightly announce a string of headline dates in support of their honest EP.  The No Vacancy tour kicks off April 12th at Schubas Tavern in Chicago and includes a play in their home town of Nashville, TN.  Following the headline dates Nightly will play some colleges and support The Struts on five dates in May.  Nightly released the honest EP last fall.  The set includes the song “xo” which has amassed over 4 million streams across all digital streaming partners.
The video for “xo” was shot in Los Angeles and directed by Tobias Nathan.  Watch the video premier on Vevo here.
With their name translating as ‘night, love you in textspeak, Nightly match their inventively textured sound with a guileless approach to songwriting.  Singer Jonathan Capeci and guitarist Joey Beretta are Pennsylvania bred cousins who bought matching Fender Squier Stratocasters as kids. As Beretta started playing in bands in his early teens, Capeci began experimenting with songwriting and at 17 both began playing together.  A move to Nashville after a short lived college stint saw the formation of Nightly.  With a vision of bringing an urban feel to the quintessential rock-band dynamic, they quickly carved out a sound of their own, playing local clubs with a full band and independently releasing ‘xo,’ which fast made its way into rotation on Nashville’s ALT 98.3 playlist.
Below is a complete list of tour dates for Nightly: