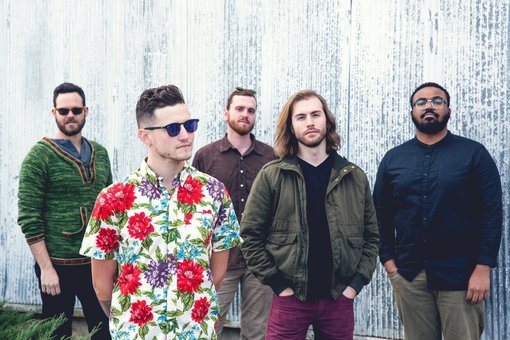 photo cred // David Bean
With 10 years as a band and considerable success under their belts, hometown darlings The Delta Saints are back in with full force in anticipation of their forthcoming release Monte Vista, out  everywhere April 28. Produced by Third Man Records alum Eddie Spear [Jack White, Arctic Monkeys, Chris Stapleton], Monte Vista is a rock and roll journey inward, evoking the visceral grit of the genre, peppered with a splash of synth fueled psychedelia and the swampy bayou blues. The album is a journey into self, brimming with emotion and telling tales of life, love and youth- through the lead single "California'" to groovier vibes like that of "Crows," to the Bowie tribute "Space Man." The album is as eclectic as any we've seen from the band, offering catchy hooks and gritty rock and roll along with dreamy ballads like "Two Days" that run the gamut of the versatility of sound that we've come to expect from The Delta Saints.  They seem to embody every universal feeling of invincibility and the subsequent realization that none of us are invincible, felt especially in tracks like "In Your Head" where Ringel declares 'I may never sleep again and that's alright!" to  the sultry bravado of "Sun God" and the anthemic "Young and Crazy."

Hannah had some questions for frontman Ben Ringel leading up to the release of their new album Monte Vista, out this week. Check out the interview below and don't forget The Delta Saints are headlining Lightning 100's Block Party at Marathon Music Works Saturday, April  29 with Okey Dokey, Luthi, The Lister Brothers and more. Enter to win a pair of tickets to the show or grab your tickets here (use promo code LOVELOCAL at checkout for $5 off).
​
HP: Your new single, "California," brings the Saints' blues roots squarely into 2017. Man, it's catchy! What inspired this shift?

BR: It makes me so happy to hear you say that! I think it’s a shift that we’ve been working towards over the past few years. We were starting to feel a certain isolation because the music we were expected to make wasn’t what we were all digging on. We were/are listening to bands like Radiohead, The Alabama Shakes, and Pink Floyd, but there was this expectation that we needed to remake Robert Johnson tunes. With our last record Bones we took a big step out of that expectation and into the rock world. Monte Vista is another huge step into those modern sounds. A big focus was on songwriting, but also production and making a record that sounded like the ones we all are freaking out about.

HP: What can we expect (and when!) from the Delta Saints' next studio release?

BR: We’ll be dropping our new album Monte Vista on April 28th! I think that "California" is a really great and accurate snapshot into this album. We really pushed to make a modern record and to throw ourselves into new spaces. I think this record tells a better story than we’ve ever told, and has such a heavy focus on melodies. We spent all of last year challenging ourselves to write songs better than we ever had and I think this record shows that. I can’t wait for everyone to hear it!

HP: What are y'all listening to these days? Whose albums inspire you in 2017?

BR: A huge record over the past year for us was Anderson Paak’s Malibu. That record hit the band hard and it’s still in heavy rotation. Within the band, 2017/16 has been a big Beatles resurgence within the van speakers. I don’t think there’s a better band to be immersed in while making a record. Also, Spoon’s new record , Hot Thoughts is fantastic as well. The production is fantastic, and their songwriting is really wonderful.

HP: What are your plans for the next year?

BR: We’ll be going back to Europe a couple times, and finishing touring off of Monte Vista. We’d love to have another record ready to drop somewhere in the 2nd half of 2018, but we’ll just have to wait and see what comes. Regardless, we’ve got no plans of slowing down.

HP: How do you work on new ideas together? Do you have a fairly set creative process, or do you tend to just follow where inspiration leads?

BR: There isn’t really one single way that ideas work themselves out. About half of Monte Vista was written in our studio space and started with Nate, Dylan, and I. The rest came in pre-production with the whole band, or in the studio. One thing we really focused on with this record was being song centric, as opposed to jam centric. Our producer Ed wouldn’t even listen to an idea unless it had a vocal melody or lyric with it. So we really focused on starting with strong melodies and building the song around those.

HP: Y'all were the first band I ever paid to see in Nashville! How has the local music scene impacted your trajectory as a band?

BR: I’m really honored that you gave us your money, especially in this city! Nashville has a really quick and sometimes brutal way of trimming the fat. If you don’t bring your “A-Game” people are going to let you know. On the flip-side, there is also a really wonderful community of musicians and bands around this city, if you can survive. It really forces you to develop your sound and live show because there are 20 bands behind you that are fighting for the same opportunities.

HP: Do you have any pre-show traditions you can let us in on?

BR: Generally we try to close off the greenroom, and just hang out with each other. We might put on a record and vibe with each other for about 30 minutes before we go on. It just allows us to all get on the same page emotionally before the show. If we’re feeling particularly saucy, we’ll indulge in a game affectionately called “Whiskey Slaps”.

HP: What is it about Nashville that made you choose it as the place to call home and make your music?

BR: Nashville is obviously a great city for music, and for musicians, but I think we hung around because there was this emerging rock scene that was starting to grow and take hold at the time when we graduated college and had to make the decision of where to go. Rock’n’Roll was (and still kind of is) the underdog in this town, and that bred a really great community of support for the local rock bands. It’s been really great to be a part of that and to make records in the midst of this movement.

HP: Individually, what do you think your personalities contribute to the band/sound?

BR: We’re all over the board on this one. David is the band mom/captain. He’s got a really commercial ear, and a has a deeper pocket than any bass player I’ve ever played with. He brings the funk. Dylan is the in-house rock guy. He’s always pushing us creatively and writes some of the heaviest, catchiest riffs that we play. Nate is a melodic powerhouse, and can write a damn hook! Vince is a monster on the drums. He’s got fills that literally make me dizzy. This is kind of a weird question to answer about one’s self, so I’ll just say I try and sing the best I can, contribute the best lyrics I can, and try not to trip over myself on stage.

HP: Who are some other local bands you're into right now?

BR: All Them Witches is absolutely killing it, and we’re all big fans of those guys. Their new record is killer, and it’s so great to hear Rock’n’Roll that makes you feel a little uncomfortable again. It’s risky and dangerous, which is how it should be anyways! Moon Taxi is another local band that we’ve loved since we started this band. Watching the ascent and evolution over the past 8 or 9 years has been really inspiring. They're one of those rare bands who cover both the album and live sides of the spectrum. They're good at everything!

HP:  When did you know making music was your path?

BR: Music has pretty much been the only thing that’s ever really made a whole lot of sense to me. I’m not saying that I understand music, but I’ve always been able to connect with it. It’s always been able to play with my emotions more than anything else. I’m also comically uncoordinated, so that pretty much rules out sports, and my attention span is super short, which didn’t help with my supreme career in school. Music was the one thing that kind of catered itself to my brain. That being said, there was never a moment when it just clicked, and I “knew”. We started this band and eventually booked a few shows, that lead to more shows, we eventually graduated and booked longer tours, and now we’re pretty constantly on the road. It all sort of just happened. I’d always hoped I’d do something that allowed me to be close to music, but never really knew what that’d be.
Don't miss Lightning 100's Spring Block Party  on Saturday, April 29th at Marathon Village. Tickets are on sale now. Enter LOVELOCAL at checkout for $5 off your ticket